We have been working with the wonderful Kristen Jerry owner of Creative Atmosphere to get our new website up and running, and what a better time to launch it than Puffin Media’s 6th birthday!

It’s been a crazy 6 years for both Scott and myself. Neither of us ever imagined that we would be running our own business someday as that wasn’t either of our intention when we were going to Conestoga College for Broadcast Television.

It wasn’t until the end of College that we even discussed the idea of starting a business. At that point, we were considering the future and trying to see what type of environment we could see ourselves in. We had a few options but none of them seemed to be the right fit for us.

We were lucky enough to both be employed by the College while attending so we got a lot work experience while learning the tricks of the trade so to speak. It was during this time that we noticed a large discrepancy between what the clients were being charged for the work completed and how much we were being paid for doing all the work.

It was at that time that we decided that opening our own business was the right choice for us because we believed that all businesses could benefit from adding video into their marketing but weren’t allotted the opportunity due to the exuberant rates companies charged.
And that’s how Puffin Media was born!

Why the name ‘Puffin Media’ you may ask? Well we get this question all the time, and we really wish we had an awesome story to go along with the name we love so much, but that really isn’t the case. Scott and I took a long time thinking about what we wanted to name our business. We wanted it to be something that would stand out from other production companies which usually just include owners name or initials of some kind. So, after hemming and hawing we realized that one thing both our families had in common was birding. Once we recognized that we knew that we had to incorporate a bird into our name and logo somehow. It didn’t take long before we stumbled upon a photo of an adorable Puffin and knew we found our name.

In 2016 when we decided to work on Puffin Media on more of a full-time basis we decided to update our logo. Below is the before and after of our logo revamp.

We have come along way from where when we started back in 2012 and this still feels like just the beginning for Puffin Media! 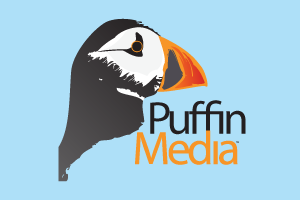 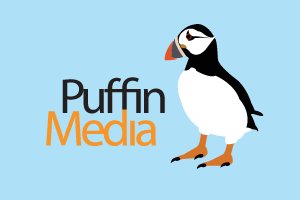